Alienware is mainly known for its sleekly designed pre-built gaming desktops and laptops, but the Dell-owned gaming division has more to offer than high prices and high-concept looks. When it comes to gaming mice, you probably don’t think of Alienware off the top of your head. That might change with the release of its newest wireless gaming option.

Dell’s gaming division currently only makes three mice, with two of them just being variation colorways. While the Alienware 610M features a striking design, it may be too “gamery” to garner mass appeal. The company’s attempts to replace the bright white that is synonymous with the Alienware brand with a darker grey palette is appreciated but fails to circumvent the inherent gaudiness of the design. This is where the 720M comes into play.

Picking up Alienware’s 720M Tri-Mode Wireless mouse shows that the company can produce competitive peripherals that have a more understated appearance. It may not be the belle of the ball in all regards, but it puts its best foot forward in most departments to create a surprising experience.

The 89-gram Alienware 720M looks like a fairly standard eight-button symmetrical gaming mouse, but where it immediately scores points is its lefty support. Logitech G snubbed left-handed gamers with its esports-centric Pro X Superlight when it removed the side buttons found on the original. Since then, there haven’t been many high-performance gaming mice with southpaw support. There’s always the original Pro Wireless, but if that shape isn’t for you, then you’re limited to the like of the Razer Viper or a SteelSeries Sensei Ten. Not a whole lot of lefty options out there so Alienware scores big points here.

As indicated by its name, the 720M connects through three different modes: 2.4GHz wireless, Bluetooth 5.1, and USB-C wired mode. The 2.4GHz connection can net you around 140 hours with the RGB lighting off, while the Bluetooth can run for up to 420 hours, according to Alienware. This feature informs much of the 720M’s functionality and makes it a versatile tool in any environment, whether you’re gaming or in a workflow. While you can get by using Bluetooth in a single-player game, it’s almost always recommended to run the 2.4GHz option for anything more competitive.

On the bottom of the mouse are the usual functionality suspects. There’s a switch to cycle through connection types, a DPI button, and of course, the power button. Nothing special to report here.

Looking inside the 720M, Alienware outfits its new wireless mouse with esports-ready components. The 720M’s sensor runs up to 26,000 DPI and keeps pace with top-notch sensors like Logitech G’s HERO 25K. Users can expect the industry-standard 1,000Hz polling rate and a tracking speed of up to 650 IPS.

While the sensor and polling rate run at the top of what players expect from their gaming mice, the mouse switches are where the 720M starts to separate itself from many of the other mice on the market. Alienware didn’t invent optical switches, but it’s joining SteelSeries and Razer in attempting to see ahead of the curve. Optical, as opposed to mechanical, switches can offer a longer lifespan and can help reduce debounce. While these switches are rated for 70 million clicks, the SteelSeries proprietary switches eclipse them by 30 million activations.

I just want to charge my mouse 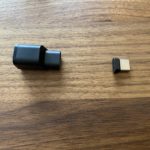 Here’s a fun nitpick: charging the 720M is done through a USB-C cable with an odd little dual-port dongle that feels like an overcomplication of a simple problem. In what seems like a fairly roundabout way of charging a wireless mouse, users can connect the USB-A end of the cable to the PC and then plug the USB-C tip into the dongle. Above the bottom USB-C port on the dongle is a port for the USB-C wireless connector to serve as a range extender. On the opposite end is a magnetic connector that attaches to the magnetic end of the additional USB-C insert that plugs into the mouse. Confused? Yeah, doesn’t really make much sense in person either.

There’s no real benefit to using this system in-game either. It can actually introduce a ton of drag and make the mouse feel as though it’s twice as heavy. The dongle is trying to accomplish too much at once. Just reach for the cable instead.

Moving on to the mouse one and two buttons, clicks here feel light and responsive. There is some tactility missing from the mouse buttons however, this being due to their optical nature. SteelSeries’ Prestige OM switches are also optical switches with magnetic actuation but they have very defined and snappy clicks that are much more pronounced than what Alienware has on offer. This is hardly a deal-breaker and will be largely up to personal preference, but they felt just a tad underwhelming compared to other options.

Alienware outfits both sides of the mouse with two side buttons. This is a big win considering lefty support isn’t at the top of many manufacturers’ minds. Clicks here are consistent and feel much more tactile than the mouse one and two buttons. Sidewalls are sturdy and stand up to an unreasonable amount of pressure, indicating solid build quality.

The rubberized scroll wheel feels comfortable and doesn’t have very defined steps. There is a little bit of texture to the wheel itself and the tactility of the wheel. Overall though, the rubberized finish may be a concern over time since it may wear more quickly than those with thinner coatings.

Handling the 720M is a breeze through all three grip types. While personal preference will vary from user to user, those with medium to large hands may have an easier time handling the 720M than those with smaller hands. Using a palm grip felt the most natural and the most comfortable in-game. As a matter of preference, fingertip grip felt the most unwieldy but still presented a comfortable experience. Claw grip served as a close runner-up and was much more neutral than the more demanding positioning of the claw-mandatory G303 Shroud Edition.

For reference, our reviewer’s right hand measures 7.7 inches (195mm) in length and 4.1 inches (104mm) in width, placing their hand within the medium to large range.

Is the Alienware 720M for you?

Alienware’s 720M is a versatile mouse that suffers from doing everything you might want in a mouse. It’s a good problem to have since you get a fully-featured mouse with lefty support and three connection types, but the whole charging dongle system feels like a misstep that hampers gameplay.

If you’re in the market for a comfortable symmetrical mouse that can bounce between gaming, the office, or whatever else you might need it for, the 720M is a prime candidate. It isn’t perfect but what it lacks in polish, it makes up for with comfort and reliability. If the Pro X Superlight is too light on features or burned you without lefty support, the 720M is also a heavier but suitable alternative.