If you are considering buying a gaming monitor, there are several aspects to consider before pulling the trigger. Some of the main aspects to consider are the monitor’s screen size, refresh rate, picture quality, and resolution. Enter the BenQ Mobiuz, which sits just above the company’s Zowie series.

While the Zowie is designed for fast-paced E-sports gaming, the Mobiuz is designed with hybrid usage in mind. It is packed with a ton of features for gaming, content creation, standard productivity work, and consuming entertainment. The BenQ Mobiuz EX series features a starting price of Rs 21,500, going all the way up to Rs 49,990 for our model (we checked the pricing on Amazon India). So for Rs 49,990, should the BenQ Mobiuz EX3210R be your next gaming monitor; well, stick around to find out.

Inside the box, you get a few cables, a stand, and a remote with a battery and the monitor itself. The monitor took a mere few seconds to set up, all you need to do is take a few seconds to assemble the stand and then attach it to the back of the monitor. From there, you can attach the DP or HDMI cable to the back. Once you plug in the power adapter, push the power button on the remote and you are good to go. Moving on to the build, which is pretty standard for a gaming monitor. The monitor, mount, and stand are primarily made of pretty sturdy plastic. The Mobiuz has a silver back and is black in the front, while the black stand has silver legs on the bottom with orange accents. You also get an opening on the bottom of the mount that can be used for better cable management. You can easily adjust the height of the monitor as well as tilt it up and down or slightly swivel it to either side. Apart from the sizeable chin on the bottom, the bezels on the other three sides are almost unnoticeable. The chin at the bottom of the monitor houses dual 2.5W speakers and physical buttons underneath it, in case the remote is not around. You also get four LED strips on the back that be customised using the remote. 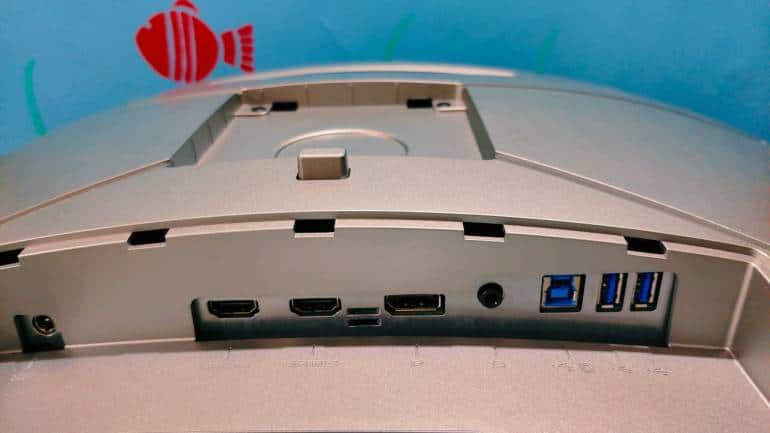 All the ports sit on the back of the monitor, these include two HDMI 2.0 ports, a DisplayPort 1.4, a 3.5mm headphone jack, a USB Type-B port, and two USB 3.0 Type-A ports. BenQ has included all of the cables in the box, so you don’t have to go out and buy any. When the USB Type-B cable is plugged in, you can use the two USB Type-A ports to connect accessories directly to the monitor. The Mobiuz EX3210R also comes with a smart switch feature that allows you to map different monitor settings to different ports. This allows you to automatically switch to a setting when you change the input source.

BenQ has opted for a VA panel on the Mobiuz as opposed to the standard IPS panel that we’ve become accustomed to. However, the viewing angles (178-degree) here were quite good, while the 1000R curvature offers an immersive viewing experience. Speaking about the viewing experience, the Mobiuz’s VA panel features a 1440p resolution (2560 x 1440 pixels) and a contrast ratio of up to 2500:1, which is significantly higher than the rated 1000:1 ratio. To further elevate picture quality, the monitor also comes with DisplayHDR 400 certification and 90 percent DCI-P3 coverage. The display offers a typical brightness of 300 nits and a peak brightness of 400 nits, so it is safe to say it gets plenty bright. The monitor also comes with several different intelligent HDR modes titled HDRi, but more on those later. You also get an ambient light sensor on the front to automatically adjust the brightness and colour temperature to offer the best viewing experience. 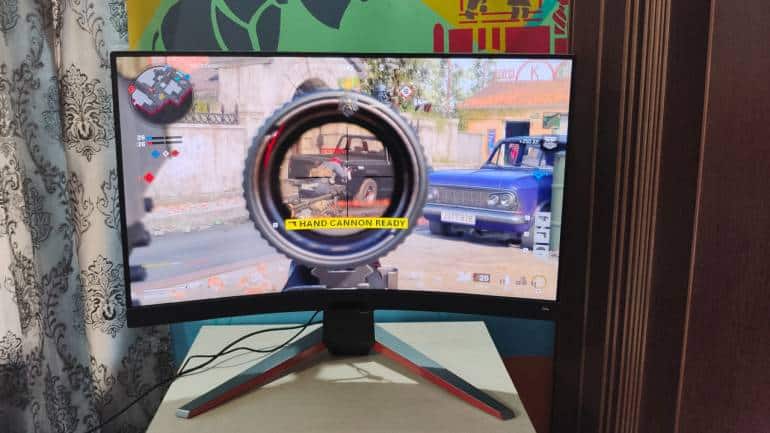 Moving on to the gaming aspects of the monitor and straight off the bat, you get a nice 165Hz refresh rate and a 1ms response time. The high resolution coupled with the 165Hz refresh rate means that you can still enjoy fast-paced games at high frame rates while still maintaining excellent visuals, i.e. if your machine can hit those high frame rates in QHD resolution. I tested titles like Call of Duty: Black Ops Cold War, Battlefield V, Doom Eternal, Halo Infinite, and Overwatch on the Mobiuz EX3210R. All the games ran smoothly with sharp visuals, vibrant colours, and excellent image clarity. I also found ghosting or stuttering to be non-existent. The monitor also comes with AMD FreeSync Premium Pro support but lacked Nvidia G-Sync support. I also ran a couple of titles on the Xbox Series X, including FIFA 21, Dirt 5, and Dungeons & Dragons: Dark Alliance. Coming back to BenQ’s HDRi feature on the Mobiuz, including Game HDRi, Display HDRi, and Cinema HDRi. Game HDRi pumps out brighter and more vivid colours when turned on, while I found colours in Display HDRi to be slightly warmer than those in Cinema HDRi. I wouldn’t call the HDRi modes game-changing, but quality-of-life upgrades. However, the one game-changing feature here is the Light Tuner. This feature allows you to brighten dark areas in a game without overexposing the highlights. There are 20 different tuning levels and cranking it up all the way brings significant light into a dark scene of a game. You also get other modes including FPS, RPG, Racing Game, Custom, and an sRGB mode. I used Game HDRi, Cinema HDRi, and FPS modes the most on the Mobiuz, although I recommend using the sRGB mode for creative work.

The monitor also features Brightness Intelligence Plus technology that uses the built-in sensor to automatically adjust the brightness and colour temperature depending on the light around you. The Blue Light filter can also be activated manually and has 20 different levels and is TÜV Rheinland Certified. There’s an ePaper Mode if you read text on the screen for long periods and a Colour Weakness Mode that uses “red and green filters help individuals with common types of colour vision deficiency distinguish colours more easily.”

The BenQ Mobiuz EX3210R features a 2.1 channel speaker setup with two 2.5W speakers and a 5W subwoofer housed in the front-facing soundbar on the bottom of the screen. The sound is tuned by treVolo and there are several different audio modes including, Cinema, SPG, Pop/Live, RCG, and FPS. I often defaulted to headphones while gaming but found the speakers to be quite reliable when watching movies, listening to podcasts or music. The volume levels also get quite loud for a gaming monitor. Overall, these are some of the best speakers you will find on a gaming monitor and can easily match the sound on portable Bluetooth speakers.

With the Mobiuz EX3210R, BenQ tends to strike a nice balance between work and play. There are a ton of features here for gaming, productivity, and content creation. However, the monitor is not without its shortcomings. While I mentioned viewing angles were good, they are far from perfect, and the shortcomings of the VA panel is pretty evident here. And then there’s the 92 ppi pixel density, which is pretty low resulting in slightly blurry text. Colour accuracy was yet another weakness of the Mobiuz. However, even after all these shortcomings, it is hard not to recommend the Mobiuz EX3210R. If you are a content creator, you probably won’t be looking to invest in a gaming monitor in most cases and then you have gaming, where the Mobiuz can do no wrong. Additionally, the array of Eye-Care features more than makes up for the mildly blurry text. The Mobiuz is also super convenient to set up, from the assembling process to accessing the plethora of features via the remote. Now, there’s no doubt that 50K is a steep price to pay for a gaming monitor, but then again, this is arguably one of the best monitors for gaming. And when compared to other premium gaming monitors from Samsung and Asus, the Mobiuz is a tad bit cheaper.

So whether it’s fast-paced shooters or graphics-intensive RPGs, the Mobiuz EX3210R can handle just about any game you throw at it. Gaming on this monitor helped me get over any prior reservations I might have had about a VA panel on an expensive monitor. The ergonomics, the audio, the features, and the hardware all help the Mobiuz EX3210R pickup an easy recommendation. It is worth noting that you can also get a 27-inch (EX2710R) model of the same monitor for Rs 35,990 on Amazon India.