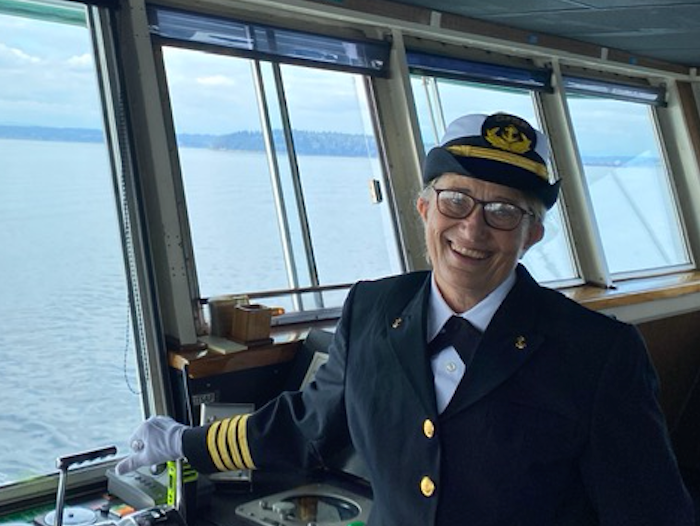 Capt. Marsha Morse retired from Washington State Ferries after over 46 years of service.

Back in late September 2021, Capt. Marsha Morse of Vashon, Wash., retired after over 46 years of service as a professional mariner with the Washington State Ferry (WSF) system.

Morse became the ultimate “hawsepiper” when she rose from an entry-level deckhand to Master of WSF’s massive, 1,500-passenger flagship, the M/V Kitsap.

We wanted to know what a nearly half-century career in the maritime industry looks like for a woman of Morse’s caliber, so we sat down with her before the holidays to find out. Here’s what she had to tell us.

Marine Log (ML): How did you get started in the maritime industry?

Capt. Marsha Morse (MM): I was traveling to Vashon Island from West Seattle one day. I lived in the city and would ride the ferry over to the island to see my horse, Duchess. Out on deck, I was watching a deckhand feed the seagulls. His name was Nick. We began chatting and I mentioned that I was a recent college graduate and looking for work. He recommended that I try to get on with the ferries, “…’cause they are hiring women now!”

It sounded like a good fit for me. I liked working outdoors and had studied some marine biology and ecology as an undergraduate in school. As luck would have it, turned out that Nick’s wife worked in the office for Washington State Ferries. He knew who to talk to. He suggested that I contact a Dave Black and request an appointment. Nick was very clear about me making an actual appointment in the office and he told me “don’t let him put you off.”

I followed his instructions. I was interviewed, given a letter of intent to hire and given temporary documents by the U.S. Coast Guard sector Puget Sound at the office in Seattle. Dave mentioned at the end of my interview that “there sure are a lot of highly educated women looking for work.”

I soon found myself employed by the WSF. I also met and worked with the group of highly educated women he hired. That was the second summer that the WSF system was hiring women. This was in March of 1975.

What follows is just a very brief summary.

ML: Tell us about your career from the early days to your retirement.

MM: I began at the entry-level position of “ordinary seaman.” This was a great introduction to the Washington State Ferry system. I was on call and moved around to various vessels, runs and assignments “learning the ropes.” Also as some say, learning “different boat, different long splice.” I had some great mentors and teachers. I also met many employees in a short order. A few are still working to this day, and I consider them good friends. I moved up quickly through the grades and became a licensed officer within five years.

I worked Chief Mate during emergency service due to the Hood Canal Bridge being blown down in a storm. The state added a new ferry run on short notice to fill in for the bridge. The Vietnam War was on, shipping was busy and there just weren’t very many officers available. My stint as an emergency Chief Mate lasted seven months. Coincidentally, I worked the same West Seattle “C” Watch assignment then that I have just retired as Master from. That span was 40 years apart.

I was able to complete three more pilotage endorsements in 1980. Then a break in my career progress began. I was engaged and married. I helped raise a family and helped out my parents. I continued to work unlicensed deck and learned daily. I worked everything from steering on the bridge to loading the car deck. The work kept me physically active and fit. This was a priority for me. The experience gave me comprehensive knowledge of all positions. These were busy and important years.

I eventually returned to my studies and completed not only my pilotage endorsements but also my Inland Master’s License. I moved up again and was on call as an officer until securing a permanent position. I was lucky to work up in the San Juan Islands as a Chief Mate for a couple of years. It is a very beautiful natural area and challenging to learn. It really helped build up my confidence. The ferry routes weave between the numerous islands and all the way north to Canada.

At one point, I put in for the passenger only boat masters position. I had “break in” time on the vessel before taking my first watch. It turned out to be a great opportunity to work on my ship handling skills. Those were quick, responsive boats and things happened fast. I eventually was able to work as a permanent Master on the route to Vashon Island where I live. I worked on the north end route to Seattle mostly, and the south end of Vashon (Tahlequah) going to Tacoma, part of the week during winter schedule. This has been most rewarding and challenging. I am extremely grateful for the opportunity.

I finished out my career close to home on the Vashon routes.

ML: What has been some career highlights for you?

MM: Getting my original license was very exciting for me. It was a real sense of accomplishment!

My first license was actually two licenses. In the 1970s, you would first test for a Chief Mate License. This was specifically AGT Inland. Then you would study and take your pilot of Puget Sound license. Your first chart and route description test would be part of passing the original Maritime Pilot’s license. Following your original would be the other eight charts and route descriptions covering the ferry system. When you concluded this portion you would be able to turn it in to the WSF office for their records and begin to work in the system. This enabled one to work a particular area in Puget Sound around the ferry routes.

My friends and co-workers threw a big party in downtown Seattle. It was in the old town Pioneer Square and was a surprise party for two of us who had just passed our first license exam set. We were two of the first of several women to be licensed that year. We didn’t completely realize the historic significance of what we had accomplished. It was pretty amazing.

Finally, getting my Master’s License after some delay was a great feeling. Being placed on the seniority list was particularly gratifying. It was some time before I would use the license. Being approved for the active working Master’s list was the final hurdle. It felt very validating and a reward for my hard work and perseverance.

I personally love it when I tackle a challenge and accomplish it. A recent challenge involved working on the South end of Vashon Island at Tahlequah. This is a particularly tricky route with fluctuating tidal currents that can really run. It is challenging not only due to velocity of currents but to their propensity to shift directions in a short time frame. This can happen multiple times on the approach at certain stages of the tide. Here, I was able to gradually improve my landings and bring the vessel in with some confidence. This was always with awareness that a quick unexpected reverse right next to the dolphin pile or wing walls of the dock could instantly humble you.

ML: What are some of your most memorable moments onboard?

MM: Beginning my work with Washington State Ferries was pretty memorable for me. It was all pretty new and exciting coming from farm country east of the Cascade Mountains to Puget Sound and then to end up working on the water. The fact that I was pioneering and making inroads for others to follow was extremely motivating. I didn’t take my role lightly.

I experienced several tests in my first few days. We were assigned nonstop work projects. I found out later the captain was not too pleased about having women on the crew. He purposely kept us extra busy. I worked hard and it seemed was accepted by my shipmates because of my efforts.

I discovered some allies in my deck partners. They were willingly teaching me and we were working as a team. Day four I had to stand up for myself when I was trying to eat my lunch. The chief mate unjustly and abusively threatened me for taking time to eat. I knew just enough about state labor laws to support my protest with legal arguments. He backed off and never bullied me again.