Frequent cruisers often cite what they view as the relative ease and safety of the travel style among the top reasons for choosing to vacation at sea. But although cruise ships are regulated with rigorous safety protocols and outfitted with resources and equipment meant for the protection of voyagers, there are some activities that nevertheless prove especially risky for cruise ship passengers. And perhaps most concerning, experts say, the biggest risks tend to lurk in innocuous-seeming activities during which passengers often let down their guards. Read on for the most dangerous activities you can do on a cruise ship, according to travel industry experts.

RELATED: This Is the Most Dangerous Place to Be on a Cruise, Experts Say.

Travel advisor Judy Tudor with the agency Fora underscores that cruise ships can be largely safe places. But one everyday hazard that poses danger to travelers is “overindulging on food and drink,” she says. “On every cruise, multiple people get very sick from eating rich foods that they don’t normally eat, eating too much, or drinking too much.” (What’s even worse than a hangover on solid ground? A hangover on the waves.)

And it’s not just the overindulgence that poses a potential risk, but the nature of eating and drinking within a shared, confined, and often cramped space—where not everyone may be vigilant about washing their hands. Outbreaks of norovirus are common on cruise ships—enough to be a reason for skeptics to steer clear of cruise ships for life.

Tudor further advises that another low-risk seeming activity can actually pose more danger than many travelers realize in real time: sunbathing by the pool. She describes seeing “many serious sunburns over the years” that can ruin a trip with pain or discomfort—and worse.

Add alcohol to the mix and the pool deck can pose an increased risk for drowning, too. So stay alert when sunbathing, moderate alcohol in the sun, and reapply that SPF liberally.

Jeremy Camosse, author of the book Cruise Hacks, and web editor in chief of the shore excursion site Gangwaze.com, explains that activities in port also present plenty of potential risk—even far more, in his view, than activities on the ship itself. “On ship there’s not much danger to be had, other than a sunburn or hangover,” he says. “Off ship, however, you’ll find that excursions can get a bit risky. As an example, ATV and motorcycle excursions can go sideways—literally—quite quickly. We’ve seen and heard of many passengers ending up in foreign medical facilities as a result.”

He adds this practical bit of advice for cruise ship passengers interested in such excursions: “If you’re planning to do some risky tours, at least save them for the back half of your sailing!”

Sometimes, similar activities are even offered on ships while at sea, and experts urge caution here, too. “An area of safety that is overlooked by a lot of passengers are the activities that require safety waivers to be signed—like rock climbing, wave riders,” explains Steph Shuster, experienced cruiser and CEO of DCL Magazine — the Disney Cruises Fan. “Dangerous on land means an extra layer of danger on the seas in motion.”

RELATED: For more up-to-date information and travel advice, sign up for our daily newsletter. 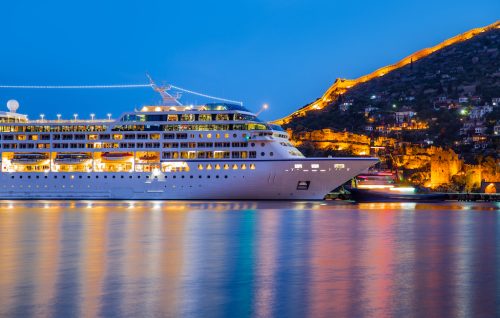 John Gobbels is the COO of Medjet, an air medical transport and crisis response membership program for travelers. Through his work, he’s seen many of the common injuries cruise ship passengers sustain.

“A significant amount of our transports each year involve cruise injuries and moving people from cruise port hospitals to their hospital at home. The resin pool decks on many ships, liquid spills on marble floors, steep stairs, and uneven surfaces all present hazards that can result in a fall,” he says. “We do a lot of European river cruise transports as well—the gangways are seemingly less stable on the smaller boats, and more affected by sudden surges in currents than the bigger ships.”

RELATED: This Is the Worst Place to Sit on a Plane, Flight Experts Say.