Gov. Jay Inslee signed two transportation funding packages on Friday, one of them at our Mukilteo terminal. With our newest ferry Suquamish as a backdrop, he put his signature on the Move Ahead Washington bill, which includes $1.5 billion to help stabilize our operations, build four new hybrid-electric ferries, convert up to four existing vessels to hybrid electric and provide electrification to terminals in central Puget Sound. The governor also signed the 2022 Supplemental Transportation Budget, which includes funding for recruiting and retaining qualified personnel and a new dispatch system. 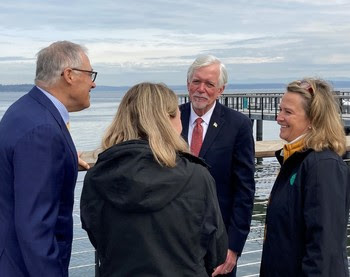 Out in the fleet on our “Triangle” route

I was happy to be out in the fleet again last week to meet with and get updates from my colleagues who are constantly interacting with our customers. Chief of Staff Nicole McIntosh and I visited our Fauntleroy/ Vashon/ Southworth route on Thursday. As always when we’re out on our vessels and at our terminals, we learned so much about all that goes into keeping our system running. For many of our riders, our vessel and terminal employees are the face of our ferry system. That’s why Nicole and I appreciate our time in the fleet hearing suggestions from our frontline coworkers. 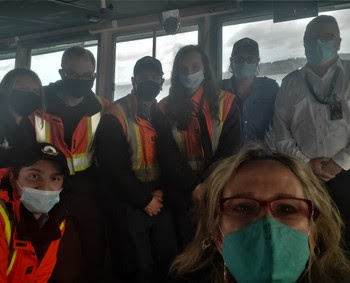 Nicole and I took a selfie with some Kittitas crewmembers in one of the wheelhouses after meeting with them. 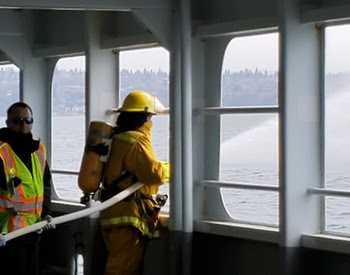 We were able to watch the Kittitas crewmembers conduct a fire drill while on board. 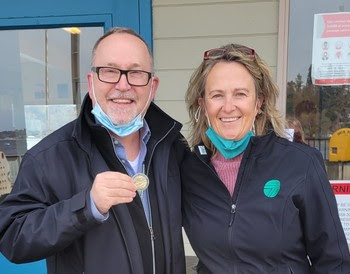 After talking with Southworth Terminal Supervisor Dennis Duff, I handed him a WSF On the Spot coin, which recognizes acts of exceptional service, achievement or special recognition of a job well done.

To thank our employees for their dedicated service throughout the pandemic, Rep. Dave Paul, who represents Island, Skagit and Snohomish counties in the state legislature, toured our Mukilteo/Clinton route earlier this month. He met with crewmembers on both Suquamish and Kitsap. 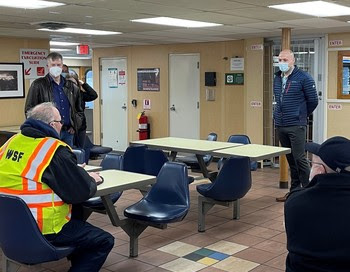 Our Seattle/Bainbridge run is a little more than a week into its trial service stage (Stage 3) of our Service Restoration Plan (Plan), which outlines steps to restore service to pre-pandemic levels on a route-by-route basis. As outlined in this week’s progress report, we’re monitoring the run and once it reaches 95% reliability for a three-week period, we will announce it fully restored (Stage 4).

Most of our other routes remain in the alternate service stage (Stage 2), running alternate service schedules that I know have been challenging and frustrating for many of our riders. We’ll keep you updated on our restoration efforts and when we’re ready to trail full service on other runs.

Know a teenager interested in maritime studies? Maritime High School is accepting applications for incoming ninth and tenth graders for the 2022-23 school year. Students do not need to live within Highline Public Schools boundaries. This is a great opportunity for teens curious about a career with us at Washington State Ferries!

Crews working on our Seattle Multimodal Terminal Project wrapped up some very visible work along Alaskan Way this month. They removed a bulkhead on the north side of Colman Dock, opening up 180 feet of shoreline – a key part of the project’s plan to restore vital salmon habitat near the Elliott Bay Seawall. Read more about this restoration effort in a recent blog from our contractor, engineering firm Herrera.

Our multi-award-winning Mukilteo terminal project, which opened in December 2020, just captured two more honors! The facility recently won a regional Gold Award for engineering excellence from the American Council of Engineering Companies (ACEC) of Washington. The project is now a finalist for a national ACEC award in Washington D.C. in May. The terminal was also named a national winner of WoodWorks 2022 Wood Design Award in the Wood in Government Buildings division. Congratulations to everyone involved!

I learned with great sadness last week about the passing of a member of our WSF family. Storekeeper Murray Hoffman succumbed peacefully to an illness he’d been battling for more than a year. Murray has been with us since June 2000, working in our warehouse. My heart and thoughts are with his family and friends and all of our employees at this difficult time.